Netflix has announced the release of "Cuties," a film about an eleven-year-old girl who becomes obsessed with "twerking." Netflix issued an apology for a poster for this film, but has yet to say that the film itself will be taken down. We recently covered a Hasbro toy for small children that giggled and moaned when you rub its groin, revealing what could be a pattern of support for child sexualization by mainstream corporate bodies. 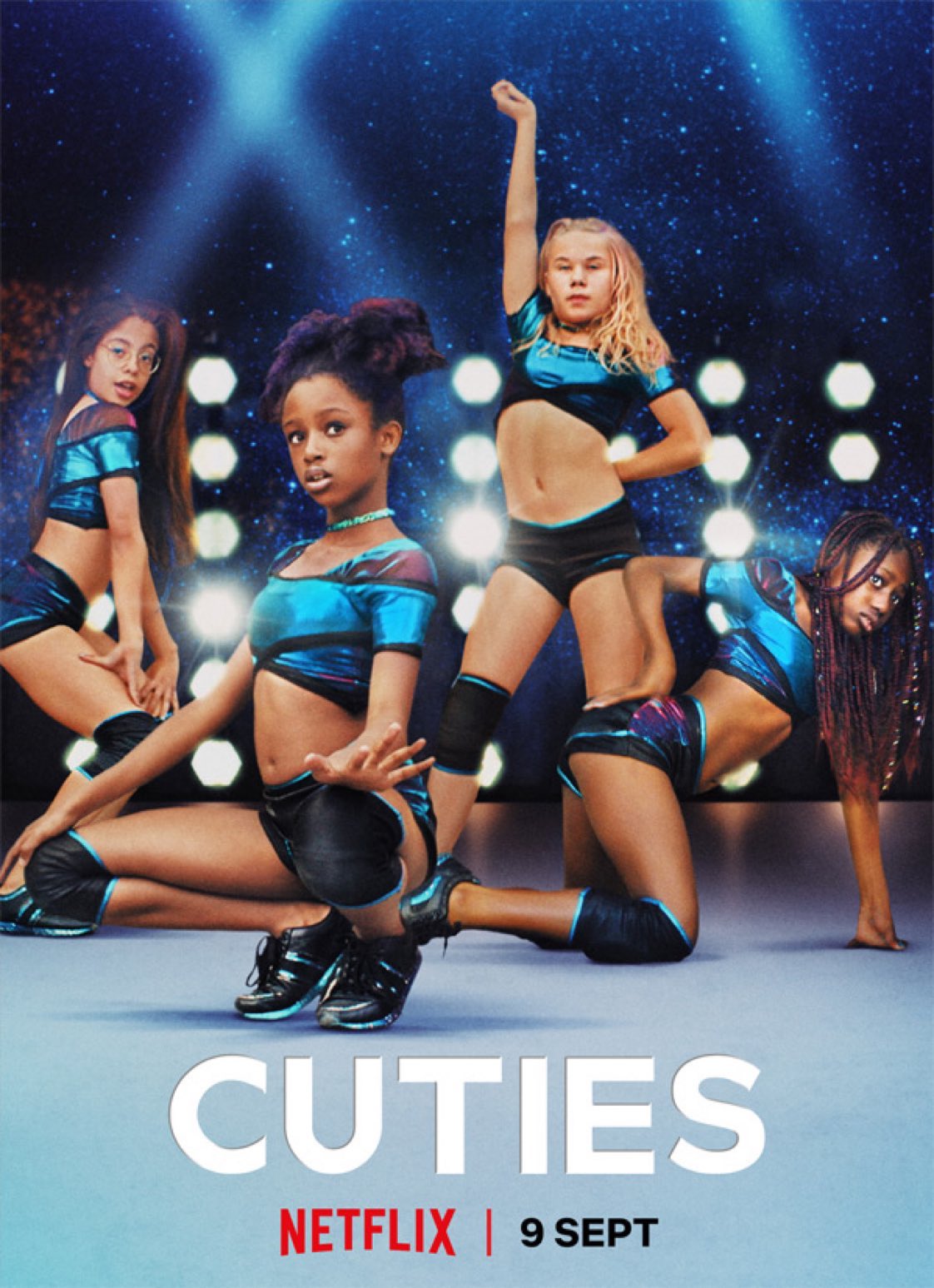 The poster showed four little girls wearing tight, skimpy clothing. The poses in this photo are what one would typically expect out of an advertisement for a strip club. There are a lot of questions that this raises, but things get stranger yet when one looks at the stated synopsis of the film: 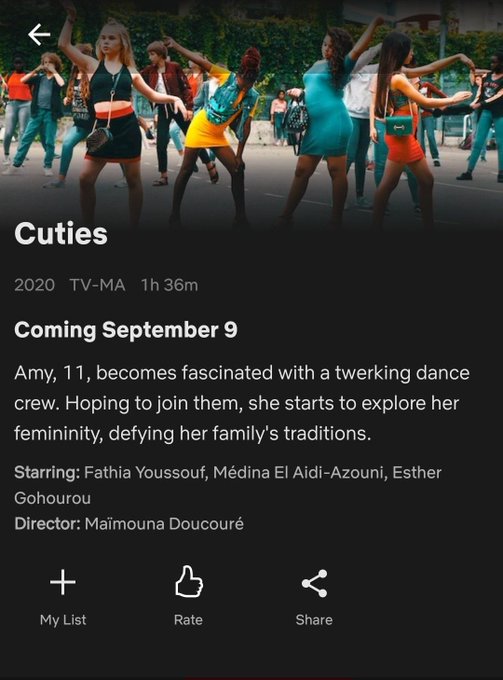 Amy, 11, becomes fascinated with a twerking dance crew. Hoping to join them, she starts to explore her femininity, defying her family's traditions.

In this second photo from the synopsis, we see these little girls on the street wearing tight clothes, little miniskirts, and carrying around stylish little purses. This is the kind of outfit women wear when they're going "out" to the club hoping to get picked up. Either that, or when they're street walkers. I can't speak for parents in general, but my guess is that most of them don't want to have to speculate if their eleven year old daughters are walking the streets or if they just want to go to "the club." 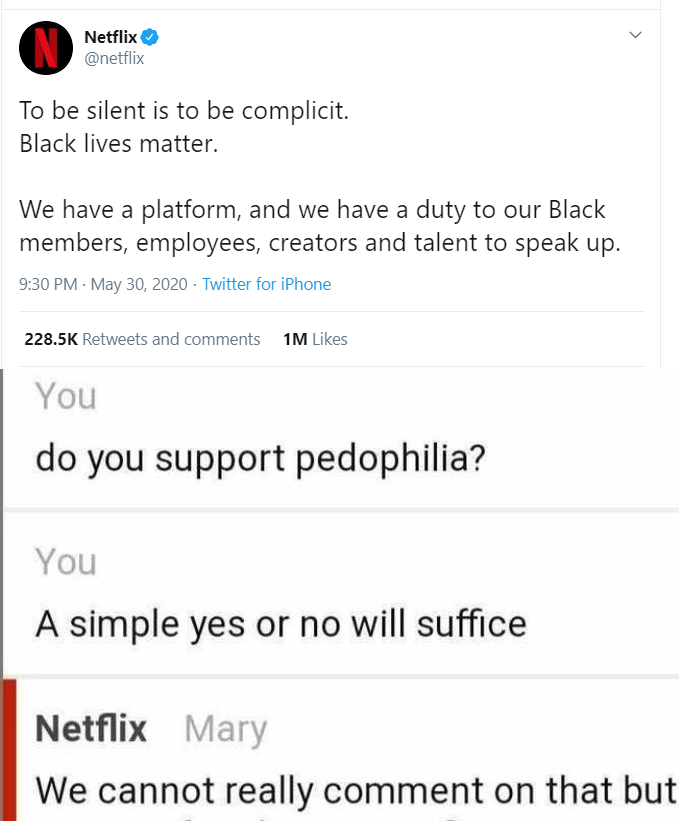 Netflix is very vocal in its support of Black Lives Matter. This company takes it so seriously that it goes as far as to say that anybody not actively supporting Black Lives Matter, much less opposing it, "is to be complicit" in the totally unprovoked murders of saints like George Floyd, peace be upon him. In other words, support Black Lives Matter or you're part of the problem, you racist, you. They have a much more "nuanced" view of pedophilia, though. Apparently, Netflix can't comment on whether or not the company supports pedophilia, presumably because it's still politically incorrect to openly be in favor of raping children. 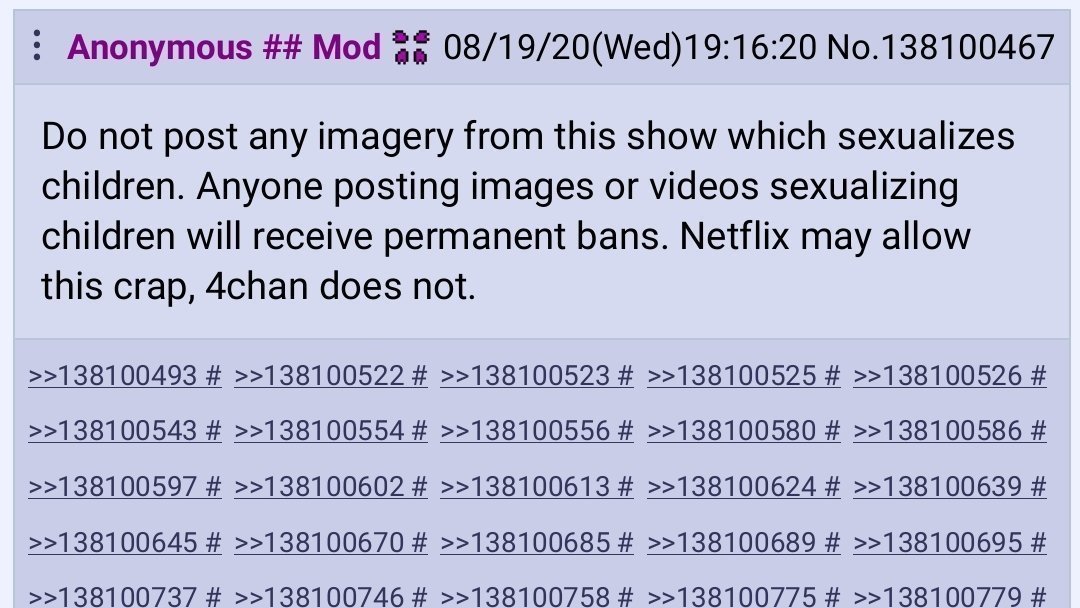 The 4chan moderators have taken a moral stand on the subject. 4chan is known as being the Internet’s free speech zone, but it appears that it’s less willing to tolerate things adjacent to cheese pizza than Netflix. One of the aforementioned questions raised is going to be: how depraved will these corporate bodies become as time goes on? Who, or what, will stop them? 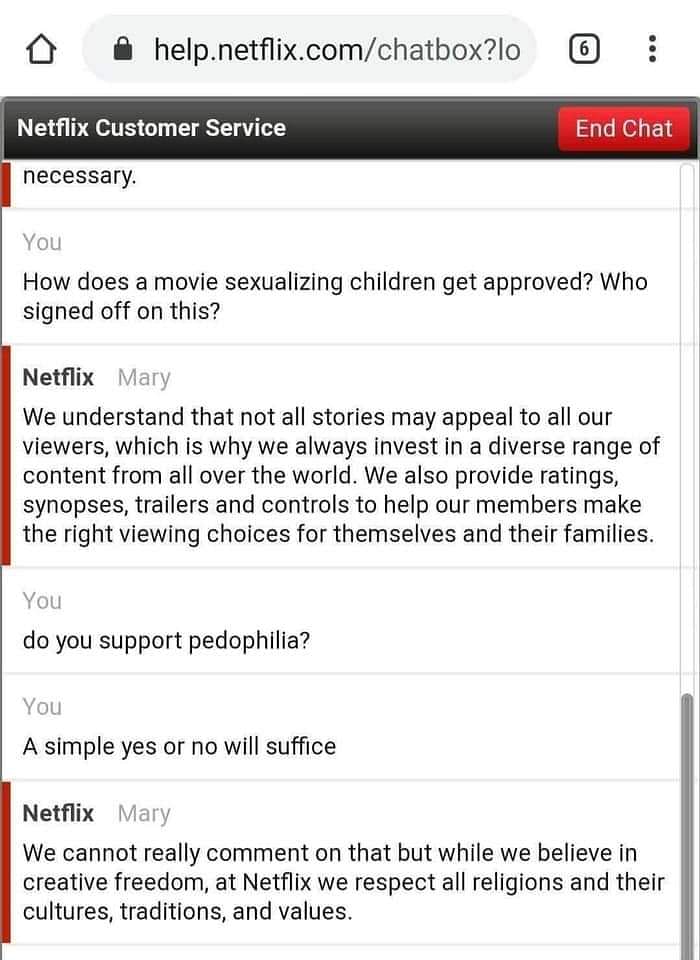 Netflix claims to "respect all religions and cultures," as an excuse for why it has 11 year olds twerking on its network, but apparently that's not the case when it comes to anything that offends Black Lives Matter; so far, casualties include, but are probably not limited to, episodes of Community, Chris Lilley comedy acts, the entire show Little Britain, an episode of It's Always Sunny In Philadelphia. an episode of W/ Bob and David, and The Mighty Boosh and the League of Gentleman in the United Kingdom. 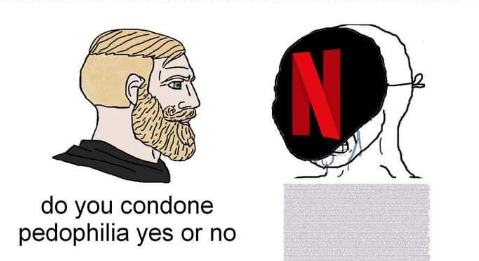 Netflix is perfectly willing to exercise editorial control over its content. It just understands that being inoffensive to blacks is extremely important and respecting the right of pedophiles to shill their borderline child pornography on their service is just as important. After all, we need to respect all cultures, unless of course it's yours. But one unavoidable takeaway here is that, according to Netflix's own standards, it tacitly supports pedophilia.