Recently, Wizards of the Coast, the company behind Dungeons & Dragons, declared that they were against racism. This is the largest corporation to ever declare this bold social statement, as no one else has ever said anything about racism before. Brave and stunning.

I Cast Virtue Signal at Level 9

This is called an archetype. Archetypes apply not only to individual characters, but also across races. They serve as a useful template for people to quickly and easily understand what a world is presenting. Archetypes are cemented in our minds as an evolutionary part of story telling. This is basic literature 101. Even to some of the lowest types of players that have co-opted the public spaces of tabletop RPGs, I have seen no one bat an eye when making fun of kobolds as a race of dumb lizards that can't stay out of trouble, even if it is a romanticized and comical form of 'racism'. When this lighthearted, playful take is done, it slips under their radar. With any significant meaning to common archetypes and races, then they stand out strong in those liberal players' minds because they are often aware of what to become offended by. An Orc barbarian wearing gold signets on his fingers and speaking in a vaguely black accent will be more likely to set off the wrongthink alarm.

Thus, we will get to watch as orcs and drows walk around in shining gold armor with skull necklaces, as paladins are archetypically associated with.

In the year 2050, racist D&D books will be a collectable relic.

Get excited for next product, where we tell you how, for the low price of $40, to make house-rule adjustments to your race of choice. The good news with tabletop stuff is the nature of non-electronic entertainment is a lot easier to change around than vidya. A DM who is conscious about exploits and does a little research on balance can make their own decisions on this and effectively undo the poz. Or build their own games and worlds up from scratch and share them within. This writer's speaking from experience, as a DM for a homebrew campaign would let us brew entirely new races with some hand in keeping things from being too overpowered.

Some Notes For Wanna-be DMs

As someone who urges these circles to create their own media and content, I also would extend that to inviting people to build a counter-culture in tabletop RPGs, whether making their own systems or just gathering their own groups of friends and relaxing once a week to do anti-goblin pogroms. This article's writer is no DM and is fairly casual at tabletops, but general game design and writing, of course, is very relevant to the topic.

As a DM, it is worth noting that you cannot nor will ever truly be in total control of the players. Somehow, someway, they will throw off your 40-hour campaign, and it will happen in the first 30 minutes. Gauge the general culture of your immediate players in your campaign and after a few sessions, with good intuition, you should be able to tap into the kinds of players they are and how to appeal to them best. The DM I play under tends to do homebrew campaigns best and alters between minimal planning and a loose framework of possibilities. At the least, give players plenty of space to explore. There are plenty of proper guides online that could go into how you actually do this, but these are things you should keep in mind as a DM and a game/experience designer.

Hero With A Thousand Faces 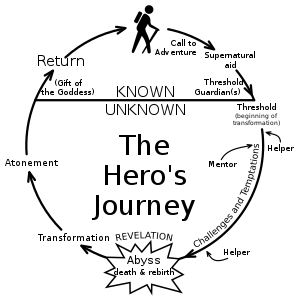 For the story and lore autists. A commonly cited book in regards to literature and story telling. Joseph Campbell describes many common themes that resonate deep within many stories, and can be seen as an elaboration and extension of Aristotle's three act structure. You can find many summaries of the content with a simple search for the Hero's Journey. You may not really use a lot of this in practice, but understanding these ideas may help you craft narrative arcs for your players, if this is your group's kind of thing.

Despite all this, I should clarify that I don't hate subversions. Not everyone goes into playing a game about wizards, dragons, and dungeon crawling expecting a 100% factual representation of real-world history. Some people just want an escape and if approached light-heartedly or humorously, a subversion of a trope can be amusing or add character. But it is very apparent when this is no longer a simple DM or group playing with character concepts. When a corporation rewrites its own lore and history because they are upset 13% of orcs do 50% of village raids, it is very apparent that ulterior motives are at play.

As I have said before. Every corporation in media is declaring openly to take everything White people might have liked and gathered around, then dump hostile anti-White narratives and subversions to it. The only course of action is to respond by striking out all of these, mocking them, and moving on towards crafting our own counter-culture.